In this interview, we talk with author, Purdue alumnus, and astronaut Colonel John H. Casper, (USAF, Ret.) about his forthcoming autobiography, The Sky Above: An Astronaut’s Memoir of Adventure, Persistence, and Faith.

Q: Could you give a brief description of your book?

The Sky Above tells how persistence and determination led me to fly in space, after serving the nation as a combat fighter pilot and test pilot. Despite life-threatening experiences and failures, my spiritual faith was pivotal in overcoming life’s challenges.

Throughout flying stories told in “pilot lingo,”  I invite the reader to ride alongside me in the cockpit, feeling the fear of enemy antiaircraft fire and the squeeze of high g-forces during combat maneuvering in jet fighters. I describe exhilarating Space Shuttle launches, the magical experience of weightlessness, and the magnificent beauty of Earth from hundreds of miles above.

Q: What is the goal of your book? What motivated you to write it?

The goal of my book is to tell readers my life story, which is a true adventure of overcoming adversity through dedication, perseverance, passion, and endur­ing faith to make a lifelong dream and vision a reality. I hope those trying to reach their dreams, whatever they are, will find inspiration; those unsure or challenged in their faith, encouragement.

Q: Military Service is a tradition in your family. You describe a “service before self” family mentality toward your dad’s service as a pilot. Was this mentality impacted by your family’s faith? Conversely, do you think this mentality affected the way you view(ed) and practice(ed) your faith?

Yes, I believe there is a link between my faith and military service, because both ask a person to “serve” something greater than oneself. Christian faith asks you to love God with all your mind, body, and spirit, and to love your neighbor—those around you—as you love yourself. Those in military or government service are serving our country by defending and upholding our foundational values and traditions. Both faith and the military emphasize the idea of serving others, rather than self-centeredness.

While growing up, I watched my grandparents and parents help others as an extension of their faith, and I witnessed their service to our country in both peace and wartime. They didn’t brag about it; they were merely helping those in need or helping our country defeat those who would destroy our way of life. I’m grateful for the strong example they set for me. 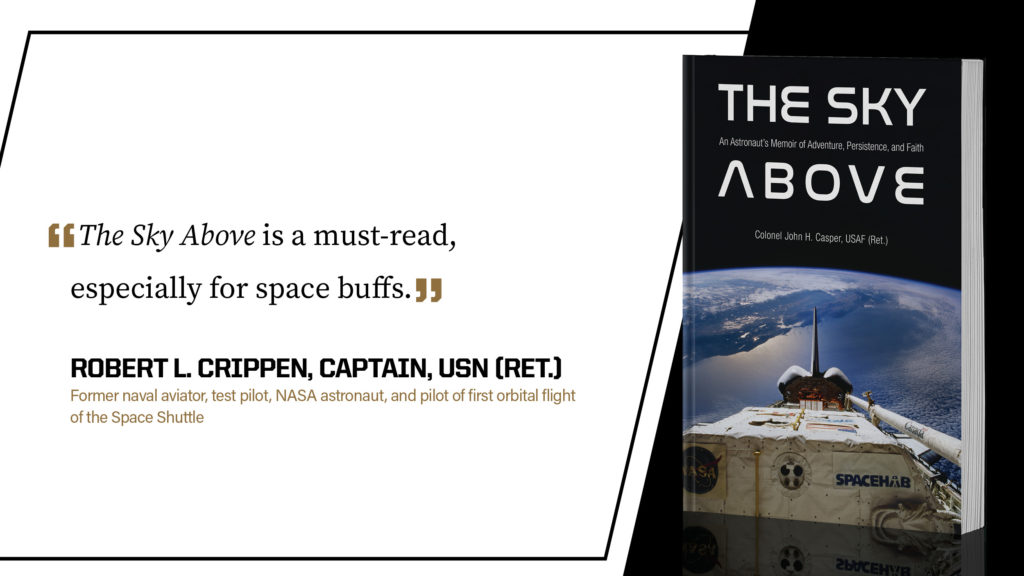 Q: Do you have any advice for aspiring astronauts?

My advice to anyone with a dream or vision is to work hard and not be discouraged if you don’t succeed the first time. For most of us, following our passion or dream takes determined, persistent effort over a period of time to reach the goal.

Those who want to be astronauts will need to study hard and perform well in science, technology, engineering and mathematics. NASA also selects a small number of medical doctors in each incoming group. It’s best that you study subjects and work in career areas that interest you or that you have a passion for. Then, if you don’t become an astronaut, you’ll be working in a career field you enjoy.

Q: Do you have any thoughts on what the future of NASA and American space missions might look like? What would you most like to see explored? What challenges do you think NASA and aspiring astronauts will face along the way?

Future missions to the International Space Station, or ISS, will continue as humankind learns how to live and work­­ in space. ISS is a microgravity laboratory with a multi-nation crew (­15 nations cooperate) orbiting Earth at 250 miles altitude. The space vehicle weighs nearly one million pounds, has been continuously crewed since 2000, and has conducted over 3000 experiments and technology demonstrations. Because ISS is also valuable as a primary testbed for future deep-space exploration to the Moon and Mars, NASA plans to operate it at least until 2031.

Artemis is NASA’s Moon landing program to learn how to live on other worlds. This time, the goal is to stay by establishing a true outpost on the lunar surface. The first Artemis mission will fly no earlier than June 2022, using the new Space Launch System (SLS) rocket and Orion spacecraft. The mission will be un-crewed to test the rocket and crew vehicle on a 3-week voyage beyond the Moon and back to Earth. Artemis 2 is planned about a year later with a crew of four NASA astronauts on a similar 21-day mission to check out the human support systems in deep space. A lunar-orbiting habitat called Gateway is being built to sustain our ability to explore the lunar surface.

The next step is Mars: NASA’s goal is to land humans on Mars before the end of this century. The commercial company SpaceX also plans to fly humans to Mars. A human mission to Mars is hard because Mars is much, much farther away than the Moon—Mars is 35 to 250 million miles distant from Earth, depending on the two planets’ orbital positions. At their closest point, a trip to Mars takes about nine months with current rocket technology. A round trip could theoretically be completed in 21 months, with three months on the surface to wait for favorable alignment of Earth and Mars orbits before returning.

Future astronauts will face challenges similar to the ones they face today on the International Space Station—reduced or zero gravity, confinement in a relatively small space, isolation and separation from family and friends on Earth, and risk of damage to their spacecraft from micrometeorites. Radiation is the number one threat for deep space missions: ISS is in a low Earth orbit and shielded from most solar radiation by the higher Van Allen belts. However, crews on Moon or Mars missions will be outside that protection and exposed to greater solar radiation and occasional solar flares. Deep space crewed vehicles will require additional radiation shielding to keep the crew healthy.

Q: Is there anything that shocked or surprised you while working on this project?

I was surprised by the amount of time and effort it took me to research, write, and edit even my own memoir, where I knew the storyline! I had written many technical papers before, but crafting a story that interests and inspires readers is another level of creativity and complexity. Someone advised me that producing the first draft was about 50% of the writing process and I found that to be true—editing, condensing, choosing which stories to tell and which to delete, all took enormous amounts of additional time. Choosing a publisher and negotiating a contract required a completely different expertise and I had to learn that skill.

Q: Any comments for the future readers of your book?

If you like to read adventure stories, especially true ones, where the character overcomes odds to reach a goal, you will enjoy this book. If you would like to know more about flying airplanes and flying in space, this book is for you. If you’re looking for a story about spiritual faith helping someone overcome obstacles in life, my story might interest and inspire you.

Thank you to Col. Casper for answering our questions!

You can get 30% off The Sky Above and other Purdue University Press books by ordering from our website and using the discount code PURDUE30.